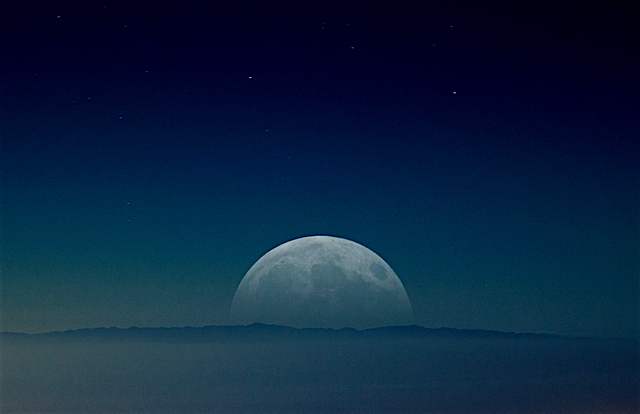 These fragments I have shored against my ruins. – – The Waste Land

The full moon is sliding down the dark sky over Catalina Island off on the western horizon. Slipping in and out of sheets of haze it casts a long shadow of a blue on darker blue pool of moonlight out from the silhouette of Catalina’s steep hills and across the open slate water to the California shore. Below me to the north, the winding lights of the village converge on the long dark strand of the Pacific Coast Highway arcing up and over the hills of Laguna Beach and on into the towns that string out towards LA, growing ever denser along that route until the highway fades into the bleak streets of the metropolis.

Driving that way towards central California, you’d be tempted to give up the coast highway, old Route 1, for a quick transit through LA, up over the Grapevine to slide down to the featureless plain of the central valley and the torpor of Highway 5. But if you stay on the Pacific Coast Highway as it disappears into the scuzzy sprawl of LA, you’ll find, in time, you took the better route.

To find the deeper rewards of the Pacific Coast Highway you have to crawl through endless renditions of our modern malaise laid out as the strip malls and neighborhoods of low degree in that part of the passage — fried food joints, store-front fortune tellers, quick shot dive bars, bad to mediocre restaurants, drive-through churches — but in the end the Highway emerges in Santa Monica, gives way to the long beaches and headlands of Malibu, sweeps out of the city completely and leads to highlands and sea cliffs and finally to the Sur. You’d never get there if you take the fast and easy freeway to the east. It is true that you might get to someplace else, some other clot of cities, quicker. But then you’d just find yourself in another variation of Los Angeles. It would be as if you never left, since, in truth, you had not.

All of which is a roundabout way of saying that if you take your time with a journey, you have a much better chance of finding that the journey itself is the destination; that if you can accept you need to pass through the uglier parts of the landscape to get to the highlands and the vistas, they will in time appear again. But if you try to take the fast route, the route that leads around all the clutter, detritus, and smash of our disposable culture, you will, in the end, have seen little and understood less, you will be traveling on the bland Highway 5s that always run into the dark end of nowhere special.

Our recent ability to achieve speed in transit has infected us with the idea that all transitions in life need to be done at speed. Yet we complain there are too many wrecks and breakdowns on these highways of our lives. We complain that there is always too much traffic around us and all we can do is hunker down in our own steel shell and drive with one foot on the gas and the other on the brake, boxed in by a flying wedge of Semis hauling things we don’t need to houses that are never quite homes, and tailgated by our own impatience only to discover our “destination” is not really where we need to be at all.

We think that the “road rage” we see around us as millions daily take to these expressways — made so that goods can flow into our stores and workers get into their corporations “on time”– is something fairly new on the scene. It isn’t.

“Road Rage” is the expression of our real rage; our compulsive demons telling all of us to get some where, to be some one, to have some thing. In time that where will become old and a new where will beckon. In time becoming a new some one will not be the one we then need to become. In time having some thing will only compel us to have some other thing. There’s no “being” to it, and less “becoming” about it. There is only the having to have and the getting to be spending.

And when we are done with years of it, we will look back and know that it was all a waste of life; that everything worth having was on the side roads that took a lot more time to travel and forced you — with their sharp curves and high cliffs — to slow down and take it all very carefully. Wise men and women have told us all of this for eons, but with our power windows cranked up, our air-conditioning on high, and our radios tuned to the latest news or the new hit of meaningless trash music, we cannot hear them. We live in a time where timeless wisdom has become fading whispers heard through glass.

Worse still, we will not hear those whispers. If their voices were to suddenly intrude on our world of piped-in music to everywhere, car, house, restaurant and bar — to intrude upon the beep and rattle and hum of our oh-so-networked offices; to speak over the custom ringtones we’ve programmed into our cell phones — we would, without thinking, and as a programmed response, hit “SCAN” and pass on to the next frequency where we would be assured of receiving confirming, affirming messages that we are doing all right and everything is perfect and finally on track. All we have to do to keep up is move just a little faster on the freeway, just speed it up, just close the gap. Life in the fast lane.

I know this road well. I wasted many years on it.

The road can be long or short, but in the end, I found it only leads to a parking lot where, if you are very good and very diligent you will get a personal parking place with your name stenciled over the name that was there before. That’s one end to the road. The other is where, if you plan wisely, you’ll have a McMansion that will enable you to park three cars inside it and close the door with the touch of a button. I know many people travel this road willingly and many others travel it because they believe there is just no other way. They’ve all sped up so much that they missed the small sign on the right that said “Scenic Route.”

The turns of my life in the last year have given me a tour of the Scenic Route that took me to places so slow and so beautiful I could not believe they existed on Earth, and to places that might seem beautiful to some, but that I would rather not have ever seen at all. As noted above, the slow road does not always wind along trackless beaches and pristine forests, but sooner or later passes through the strip malls and junkyards of our lives; places, where you want to speed up but discover your speed, is limited and checked by radar or drone scanned from the air.

I’ve been up along the Pacific Coast Highway One to Big Sur. This side road on the edge of the continent was where so many of the deeper and more lasting moments of my life either began or came to fruition; emerged from the smoke as if I always had to have part of those moments happen there to be real and be verified as important. My life has risen and fallen and risen again from those coastal cliffs and the road that winds so tenuously along the edge of them. The grand abiding indifference of the Sur’s mist-shrouded cliffs to both the road and the human lives that scuttle slowly along it never ceases to remind me of what small brief sparks we are.

South of Nepenthe in the Sur there are side roads through old redwood forests to long beaches smoothed and polished by the slow Pacific swell. I always take the time to amble down these roads to the beaches where time does not interfere.

As is my way, I stroll those beaches looking for shells, for Anne Lindburghs’ ‘Gift from the Sea.’

Although the sand is fine and clean all along this beach, the relentless waves seem to shatter every shell to fragments as they bring them ashore. Shattered shells and lumps of brain coral are what you see step after step. But still, I look down as I walk along because I see the world as a metaphor and am always alert for anomalies.

Early in the morning, walking the beach I glance down and sitting among nothing but shattered, bleached white fragments of shells, I saw one, and only one, perfectly polished and gleaming cowry. About two inches long and an inch high. One perfect thing given by the sea amongst vast strands of smashed things. I picked it up and placed it in my pocket. Then I turned and left the beach and the islands.

I’m back at my home where the first tanged scent of winter can be sensed in the breeze. While I wrote this, the birds woke up and the sun rose high. It’s getting to be mid-morning and I have to go to the post office now. There’s a bunch of small errands I’ve been putting off while I’ve been moving fast trying to learn to move slow.

The shell? It was left behind in the coffee shop somewhere along the coast road and thought to be lost. But I’ve learned that it has been found and I’ve been promised it will be returned. I hope that happens. I hate to see the beautiful, rare, and perfect things of our lives found, rescued from the fragments, and then lost again forever.