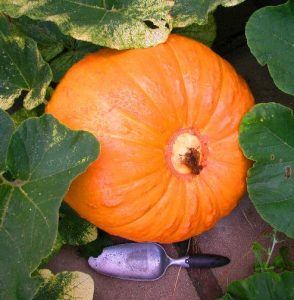 I grew this once in another life. It was a frightening experience.

If it wasn’t for Halloween, this grotesque and useless gourd would be extinct. And good riddance.

Somewhere dotted about the fruited plains of America something like lebenty-leben gazillion acres of pumpkins are planted every damn year. Then care and water and chemicals are slathered on these fibrous tumors causing them to grow big. Some very big. Some so big that they can be hoisted into the air, dropped onto a car and obliterate said automobile.

Many are midget pumpkins. This year I’m seeing teeny-weeny baby pumpkins ripe for pumpkin abuse. But most are middle to large hunks o’ pumpkin by the time they are “ready for the harvest.”

Sounds so pastoral, doesn’t it? “Ready for the harvest.” Except that when you actually “harvest” a plant the assumption is that, somewhere, somehow, some people are actually going to eat the thing.

This is the fate of only a smidgen of the pumpkins harvested. And even among those that actually eat of the pumpkin almost all are lying through their seeds when they say they like it. Pumpkin soup, pumpkin bread, even (shudder) roast pumpkin — all foul concoctions fit only for the martyr mothers among us.

I know that many will claim to adore pumpkin pie, but that too is mindless. Give me any thick paste and let me pour tons of cream, evaporated milk, pounds of sugar, scoops of cinnamon and nutmeg into a butter-laced and crisp pie crust and you’ll love it even if the base plant was black mold from the basement.

No, the pumpkin is not an acceptable food. But do we plow it under and eradicate it from our list of things we use farmland for? No. Because anything worth doing in America is worth overdoing, we expand the acres devoted to this parasite.

We do it to empower the following process.

First big pumpkins are grown in industrial pumpkin patches. Then large machines and hordes of laborers go through these fields and pick them all up. Then they are loaded onto big trucks and taken to some pumpkin clearing house where the hefty gourds are unloaded and sorted.

Then they are loaded onto other large trucks and swept away to various centralized food distribution warehouses across the nation. Unloaded again these obese gourds are promptly loaded onto other trucks and delivered to grocery stores large and small where the weakened staff unloads and stacks them in piles. Oceans of diesel are burned at every step in this process.

Then in you come and lift a hefty pumpkin up and load in your car. You drive home and unload it. Then the whole family gets together to eviscerate it, slimy guts and seeds and all. Then you all take sharp-edged implements and slash and hack at the defenseless gourd, piercing it clean through and cutting the top of its head off in some gigantic clown lobotomy.

Then you put something on fire inside it and stick it out in front of your house. More than one family every year puts this vegetable with a fire inside it on a pile of dry leaves in front of their home thus losing their house trailer.

This is done tens or hundreds of millions of times for one single night.

After this less than peak experience, sooner or later every hacked-up pumpkin in America is thrown away.

I don’t want to even begin to think about the carbon footprint on this one. Neither do you. It’s too scary. Even for Halloween.