Small Fires in the Deep 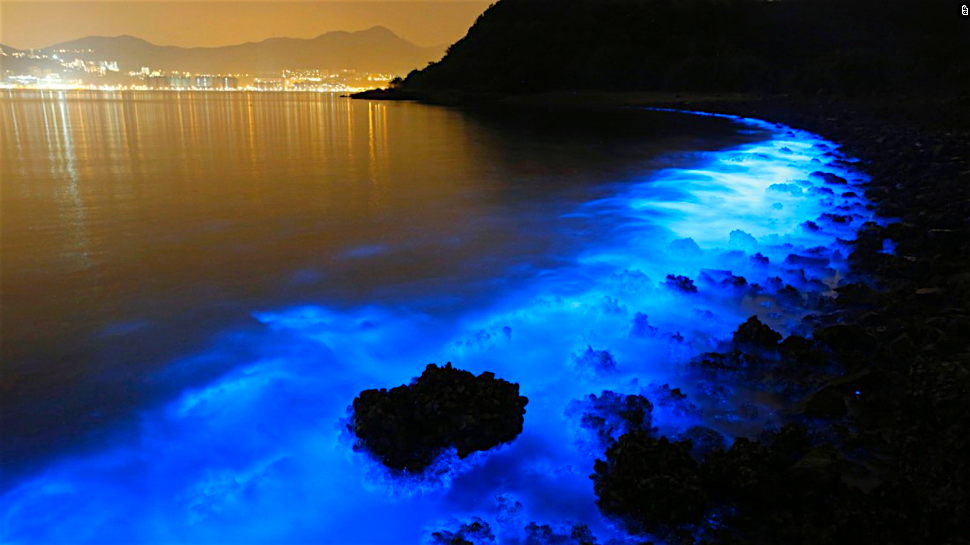 Bioluminescent bacteria occur nearly everywhere, and probably most spectacularly as the rare “milky sea” phenomenon, particularly in the Indian Ocean where mariners report steaming for hours through a sea glowing with a soft white light as far as the eye can see. — The Bioluminescence Page

There is another world above this one; or outside of this one; the way to it is thru the smoke of this one, & the hole that smoke goes through. The ladder is the way through the smoke hole; the ladder holds up, some say, the world above; it might have been a tree or pole; I think it is merely a way. — Gary Snyder- Through the Smoke Hole

These days she wakes before dawn. The sound of the automatic coffee grinder and its aroma is her alarm. Before first light today, out on the deck overlooking the Pacific, she was gazing at the sea and saw, across the flat miles of ocean stretching out to Catalina, bright flashes come and go like wet fireworks exploding under the waves. Binoculars brought the flashes closer but didn’t explain them. They were scattered all across the wide water except where the full moon sliding down the sky towards the western horizon smoothed a bright white band across the slate sea.

Later, when he woke, she brought him out on the deck to see the place where she’d witnessed this strange antediluvian light show. After a few more minutes he noticed that, in the rising light, large patches of the sea were dark, as if secret islands had risen just beneath the surface. Secret until his ‘compulsion to explain the mysterious’ arose.

“It’s most likely a large algae bloom,” he claimed. “When it was dark and the algae was stirred up by waves, breaking combers probably excited and concentrated the algae. What you saw was bioluminescence.”

“Bioluminescence,” she said. “That’s such a fine, soft word.”

They watched the dark islands under the surface of the sea for awhile longer and he wished he’d seen the flashes in the pre-dawn dark.

Toward the end of his life, Carl Sagan wrote a book about how most of humanity still lives in a “demon-haunted world;” and how science drives us relentlessly out of the dark oceans of our ignorance until, like some stump-legged fish, we scramble gasping onto the thin, dry strands of our knowledge about the truth of this world.

One of those strands in his mind was ‘knowing’ that the miracle of rush lights within the ocean was caused by the phenomenon we label “bioluminescence.”

Wonder summed by science, our youngest and most robust religion. A religion whose prime attraction is to transubstantiate the miraculous with the dependable; whose creed reverses the Eucharist by rendering the body and blood of God into bland bread and indifferent wine.

He’d long been a lay member of this fresh, muscular faith whose liturgies are written in arcane symbols of mathematics rather than arcane phrases of Latin. As a lay member and mere acolyte his understanding of science is as shallow as his faith in science is adamantine. He has worshiped the Saints Einstein, Darwin, Newton, and Bohr. He has believed that in time all will be known and, when all is known, all will be explained and all mystery resolved. He has not yet read The Testament of the Unified Field, but he hopes to before he dies and rejoins that Unified Field as empty matter glowing in the dark. Some of our current priests growing old in the quest assure him that he will. They currently hope to hunt Higgs-Boson to its burrow.

Yet still he wonders. Still he persists in his scientific heresy.

He wonders, “When we explain what we experience in life in the steel language of science, do we drive the mystery out or merely mix more mystery in?”

Sometimes he answers, “Perhaps neither. Perhaps what we do, through our relentless human need to explain, is to simply dive, as blindly as fish born below the light, ever deeper into the miracle. Perhaps we dive deep in the hope that the light from our minds and souls will, on some immensely distant day, grow large enough and bright enough to illuminate one crest of one wave rising once only out of the darkness. And that something, somewhere else in the immense darkness in which we dwell, will see our small fire and answer.”

Next post: Drive By: The Truth About Soy Face