Road Tales: Where the Buffalo Roam 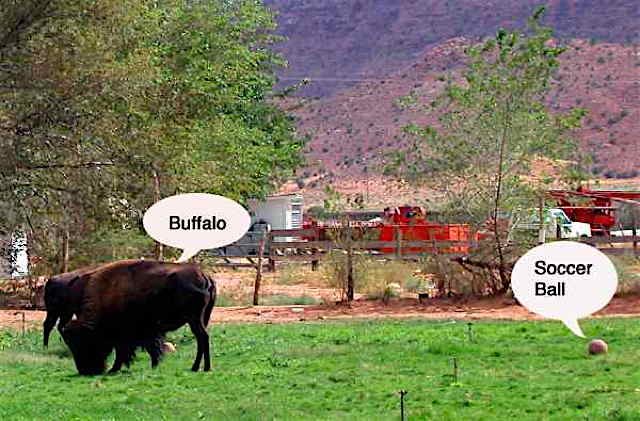 He’d hunted big game for years all over the United States. Hunting was a way of life to him. But, in all those years, he’d never shot a buffalo. He’d put his name in for the lottery that gave out yearly licenses to shoot buffalo, but year after year the winning number had eluded him. As he failed, again and again, his need to add a buffalo, an American bison, to his life bag grew to obsessive proportions. Finally, he could stand it no longer. He determined that he would buy a couple of young buffalo, raise them, and then shoot them. It seemed like a plan.

When the buffalo purchase was completed the question arose about where these buffalo were to be raised. He wasn’t a rich man and the cost to two baby buffalo maxed out his credit cards. The only viable option was to raise them on his front lawn in Moab, Utah. Accordingly, the buffalo were delivered and put out to pasture, or “out to lawn” as the case may be.

Besides grass the lawn also contained, courtesy of his kids, a couple of soccer balls. Shortly after the buffalo became his lawn ornaments, he was out walking among them when one of them discovered a soccer ball and butted it over to him with its nose. Without thinking he kicked it back towards the other buffalo, who passed it to the first buffalo who butted it back to him. An hour or so of passing and kicking the soccer ball between man and buffalo ensued.

When he went out on his lawn the next morning, they were waiting for him. One seemed to be playing midlawn while the other hung back by the water trough which had become some sort of goal. The forward buffalo butted the ball towards him. Without thinking he returned the kick over the head of the forward. No good. With a speed belying its bulk, the defensive buffalo moved quickly and butted it through his legs to the porch. When it bounced off the barbecue, they seemed to do a brief victory prance. The game was afoot.

Day after day, week after week, the strange lawn ritual with the soccer ball went on and on. In truth, he had long since pulled far ahead of the buffalo in goals, but what do buffalo know about keeping score?

In time, however, the hunting season came around. He looked out of his house on the first morning and saw the buffalo waiting for him, the soccer ball in front of the forward, the defensive buffalo pacing slowly back and forth by the water trough. It came to him then that he could never shoot them. It would spoil the season — and the soccer season, in the deserts of Utah, is never really over.

On a hot afternoon soon after, he looked out his window and discovered, much to his delight and his neighbors’ shock, that the two buffalo on his lawn were indeed male and female.

Now it is two years later and he has four buffalo on his lawn. He doesn’t hunt anything anymore. Says he’s lost the taste for it. His old hunting buddies come by every so often and razz him about the buffalo.

“You started with two and couldn’t shoot them,” one said. “Now you got four, and next year you’re gonna have five. What are you going to do then?”

He went to his garage and came back with a basketball.