Per aspera ad astra: “Blow yourselves to Christ gone or come and find me, Gully Foyle, and I make you men. I make you great. I give you the stars.”

Finally, spaceships that look like spaceships. Starship test vehicle under assembly will look similar to this illustration when finished. Operational Starships would obv have windows, etc. — Elon Musk @elonmusk 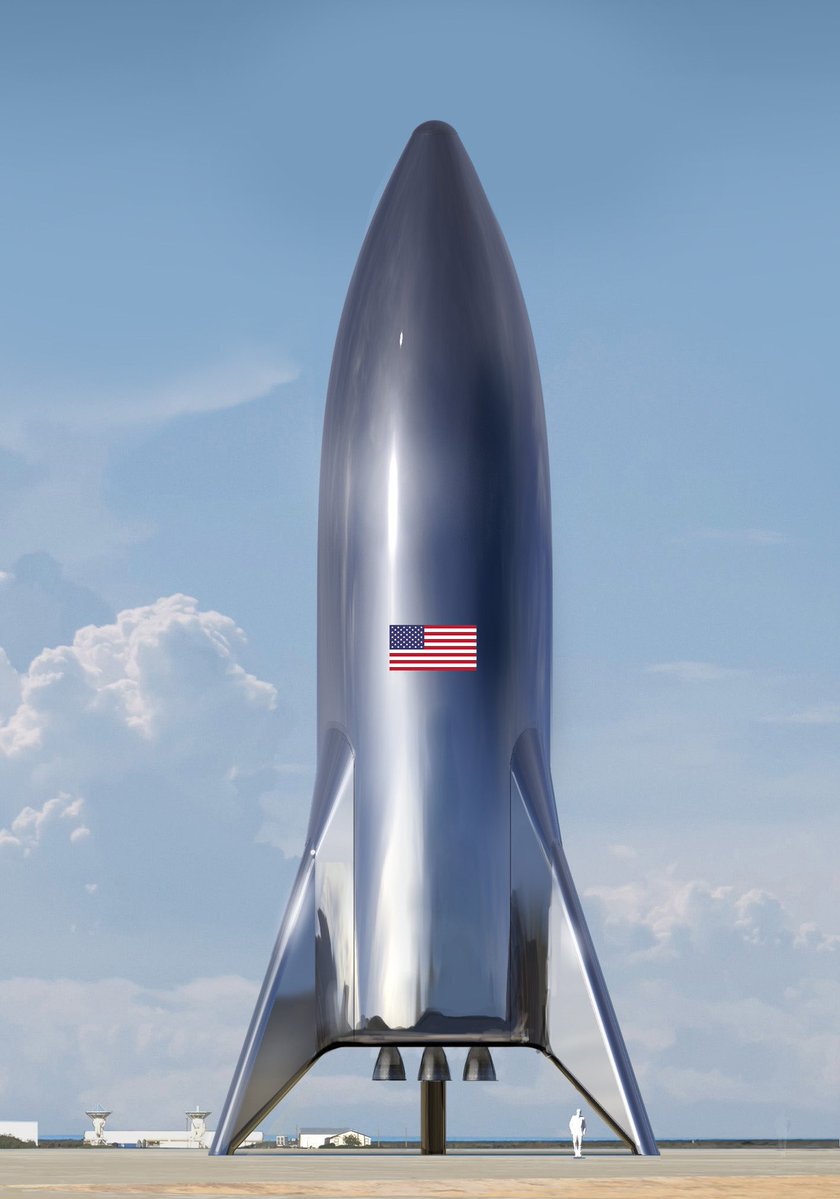 Ah but everything old is new again. Isn’t it? 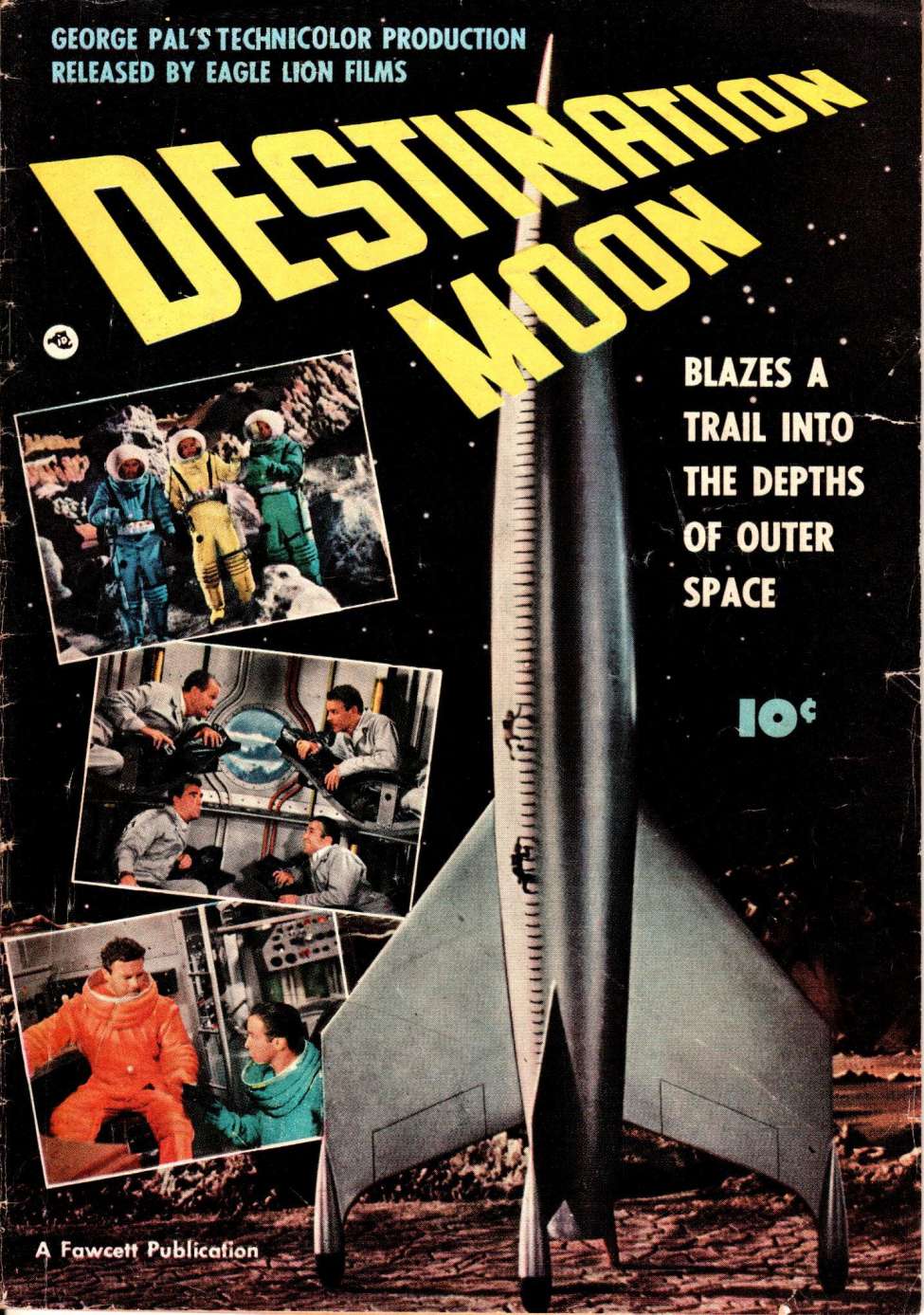 From The Stars My Destination by Alfred Bester

Having led his pursuers three-quarters of the way around the world in fifty minutes, Foyle permitted them to overtake him in London. He permitted them to knock him down, take the ILI safe from his arms, count the remaining slugs of PyrE, and slam the safe shut. “There’s enough left for a war. Plenty left for destruction… annihilation … if you dare.” He was laughing and sobbing in hysterical triumph. “Millions for defense, but not one cent for survival.”

“Damn you!” Dagenham raged. “Don’t you realize that you can’t trust people? They don’t know enough for their own good.”

“Then let them learn or die. We’re all in this together. Let’s live together or die together.”

“D’you want to die in their ignorance? You’ve got to figure out how we can get those slugs back without blowing everything wide open.”

“No. I believe in them. I was one of them before I turned tiger. They can all turn uncommon if they’re kicked awake like I was.”

Foyle shook himself and abruptly jaunted to the bronze head of Eros, fifty feet above the counter of Piccadilly Circus. He perched precariously and bawled:

“Listen a me, all you! Listen, man! Gonna sermonize, me. Dig this, you!” He was answered with a roar. “You pigs, you. You goof like pigs, is all. You got the most in you, and you use the least. You hear me, you? Got a million in you and spend pennies. Got a genius in you and think crazies. Got a heart in you and feel empties. All a you. Every you…”

He was jeered. He continued with the hysterical passion of the possessed.

He jaunted up the geodesic lines of space-time to an Elsewhere and an Elsewhen. He arrived in chaos. He hung in a precarious para-Now for a moment and then tumbled back into chaos. “It can be done,” he thought. “It must be done.”

He jaunted again, a burning spear flung from unknown into unknown, and again he tumbled back into a chaos of para-space and para-time. He was lost in Nowhere. “I believe,” he thought. “I have faith.”

He jaunted again and failed again. “Faith in what?” he asked himself, adrift in limbo.

NOW: Rigel in Orion, burning blue-white, five hundred and forty light years from earth, ten thousand times more luminous than the sun, a cauldron of energy circled by thirty-seven massive planets… Foyle hung, freezing and suffocating in space, face to face with the incredible destiny in which he believed, but which was still inconceivable. He hung in space for a blinding moment, as helpless, as amazed, and yet as inevitable as the first gilled creature to come out of the sea and hang gulping on a primeval beach in the dawn-history of life on earth. He space-jaunted, turning para-Now into.

NOW: Vega in Lyra, an AO star twenty-six light years from earth, burning bluer than Rigel, planetless, but encircled by swarms of blazing comets whose gaseous tails scintillated across the blue-black firmament. And again he turned now into

NOW: Canopus, yellow as the sun, gigantic, thunderous in the silent wastes of space at last invaded by a creature that once was gilled. The creature hung, gulping on the beach of the universe, nearer death than life, nearer the future than the past, ten leagues beyond the wide world’s end. It wondered at the masses of dust, meteors, and motes that girdled Canopus in a broad, flat ring like the rings of Saturn and of the breadth of Saturn’s orbit.

NOW: Aldeberan in Taurus, a monstrous red star of a pair of stars whose sixteen planets wove high velocity ellipses around their gyrating parents. He was hurling himself through space-time with growing assurance

NOW. He was drawn to the womb of his birth. He returned to the “Nomad,” now welded into the mass of the Sargasso asteroid, home of the lost Scientific People who scavenged the spaceways between Mars and Jupiter – -. home of Joseph who had tattooed Foyle’s tiger face and mated him to the girl, Moira. He was back aboard “Nomad.”

Gully Foyle is my name
And Terra is my nation.
Deep space is my dwelling place,
The stars my destination.

The girl, Moira, found him in his tool locker aboard “Nomad,” curled in a tight foetal ball, his face hollow, his eyes burning with divine revelation. Although the asteroid had long since been repaired and made airtight, Foyle still went through the motions of the perilous existence that had given birth to him years before. But now he slept and meditated, digesting and encompassing the magnificence he had learned.

He awoke from reverie to trance and drifted out of the locker, passing Moira with blind eyes, brushing past the awed girl who stepped aside and sank to her knees. He wandered through the empty passages and returned to the womb of the locker. He curled up again and was lost. She touched him once; he made no move. She spoke the name that had been emblazoned on his face. He made no answer. She turned and fled to the interior of the asteroid, to the holy of holies in which Joseph reigned.

“My husband has returned to us,” Moira said.

“The god-man who almost destroyed us.”

Joseph’s face darkened with anger. “Where is he? Show me!”

“You will not hurt him?”

“All debts must be paid. Show me.”

Joseph followed her to the locker aboard “Nomad” and gazed intently at Foyle. The anger in his face was replaced by wonder. He touched Foyle and spoke to him; there was still no response.

“You cannot punish him,” Moira said. “He is dying.”

“No,” Joseph answered quietly. “He is dreaming. I, a priest, know these dreams. Presently he will awaken and read to us, his people, his thoughts.”

“And then you will punish him.”

“He has found it already in himself,” Joseph said. He settled down outside the locker.

The girl, Moira, ran up the twisted corridors and returned a few moments later with a silver basin of warm water and a silver tray of food. She bathed Foyle gently and then set the tray before him as an offering. Then she settled down alongside Joseph.. – alongside the world -.. prepared to await the awakening.