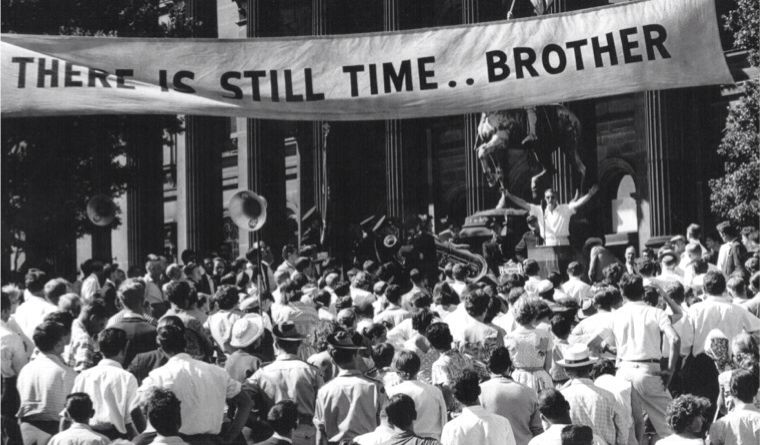 In every cry of every Man,
In every Infants cry of fear,
In every voice: in every ban,
The mind-forg’d manacles I hear
— London by William Blake

Watching the obscene sputum drip from the lips of that ancient has-been Robert DeNiro at the Tony Awards sparked my  smoldering anger with so-called “Americans.” Although this grizzled and deformed dwarf basked in the applause of his fellow political sociopaths for his “edgy” obscenities, he filled me with revulsion. In another episode of political kabuki that infests these awards, this professional pretender “acted” the part of all the demented SocialistDemocrats who could not, and now will not, accept the choice of the American people in a free and fair election.

Instead, DeNiro and his fellow travelers continue, like spoiled and vengeful children, their ceaseless and repulsive exhibition of spite; they continue in their ever-increasing flow of bile; they continue, like the uncontrollable volcanoes of Hawaii, to ooze their white-hot hate. This ceaseless and now psychopathic hate does not stop at threatening President Trump but is directed, with the sputum-flecked fury of a shrinking cadre of history’s poorest losers, at all who would, in the slightest manner, support the President and his real accomplishments.

All decent Americans, regardless of political leanings, recognize that the Left’s tsunami of Trump derangement should have long ago abated. Every day these vile and squalid attacks persist more and more decent Americans desert this dwindling and hellish choir and return to life. They may not announce this change of heart to their friends and families. They do so out of fear of being cast into the role of local pariah and so their silence deepens. But silence, they soon find, does not avail them.

Many discover that friends, family, and co-workers have been commanded to by their masters to view silence as assent. They find that the Left increasingly requires the enthusiastic support of their Two-Minute Trump Hate sessions. They find that if they do not “go along” they will not “get along.” This is underscored by the constant reports of others who have lost their livelihoods and their access to the various “Dark America” controlled social media platforms. They rightly fear this sort of techno-shunning and job-killing powers of the propaganda arms of “Dark America.”

And why shouldn’t they since the propaganda from the puppet masters’ dark satanic mills spew forth from all the mass media outlets. This anti-American, democracy-destroying, propaganda suffuses the television from programs to commercials. It simmers, seethes, and gibbers in the new witch hunters of Facebook and the perverted leaders of Twitter and their “hate speech” police. In these pretend realities, like those of the stage on which DeNiro spewed his bile or in a host of films released into knowing losses but because they carry the Left’s “lessons,” their utopian world carries on with none of the supporters facing the least of any consequences. Indeed they are, like DeNiro, rewarded like the trained seals they are with the fat if rotten fish of fortune and fame for spouting the Party Line.

I can envision, in my more secret mind, many “consequences” for these vile “Americans,” but these visions are so violent and rabid the closest friends to which I confide they find them too extreme, and endeavor to talk me down from them. The latest and somewhat acceptable vision involves wood-chippers and compost piles such as that seen once in the Longmire television series. But even that relatively tame “consequence” suffuses me in too much hate.

And so I find myself praying, not for the redemption of these vile Americans, but to be released from the anger and hate that they stir within me. In such prayers, it comes to me that reacting in anger and hate is, to a fine degree, exactly what the puppet-masters of clapped-out souls like DeNiro want to happen. They want the hate to grow. They want the degradation of the population to become deeper. The degraded Left in America, having lost their majority and now shrinking to a smaller minority daily, wants what the Left always wants of a decent society; it wants it to become worse. As the old Bolshevik saying goes, “The worse the better.”

The Left, when it feels its grip on a culture loosen, always seeks to promote widespread unhappiness and violence. In our current state, they cannot do this through direct political means so they seek to do it through the one area that they still control –absent many wood chipper rides pour encourager les autres — the media and the culture. Hence the unceasing flow of septic thoughts and programs and presentations.

And so, since I cannot live on a constant diet of hate, I ask along with a few hundred million other Americans, another old Bolshevik question, “What Is To Be Done?”

To ask this question is to shake the oracular 8-ball and constantly come up with the answer, “Reply hazy try again.”

To many of my fellow fed-up Americans the answer is “Civil war real soon.” I admit I like to entertain this answer in my hate-filled fantasies and can spin scenarios with the best of them. But then I think of the reality of the civil war in “Syria” and all my fantasies fade as all such terrible fantasies should. I can, of course, imagine a number of incidents that would trigger such an event but I shall, for now at least, let those fantasies fade as well.

In truth, looking at the kind of evil America represented — today by the toothless DeNiro and tomorrow by some other puppet locked in his mind-forged manacles —  I know we have not yet finished with the first Civil War and do not need to conjure another. I find, in my calmer state, that I want this country to be at the state it was, the state that Lincoln pleaded for in his first Inaugural address.

And yes I know, since we have not yet finished the first Civil War, that many here and elsewhere view Lincoln as a tyrant of the first water. Still, the prayer given on March 4, 1861  is one that might yet serve and protect us now. If we can hear it and if we can heed it.

Today I pray that all decent Americans can hear and heed Lincoln’s prayer and that it does not become like the sad and ironic banner flapping over a dead world in the old movie, On The Beach. That banner says, above a pile of corpses, “There is still time brother.” 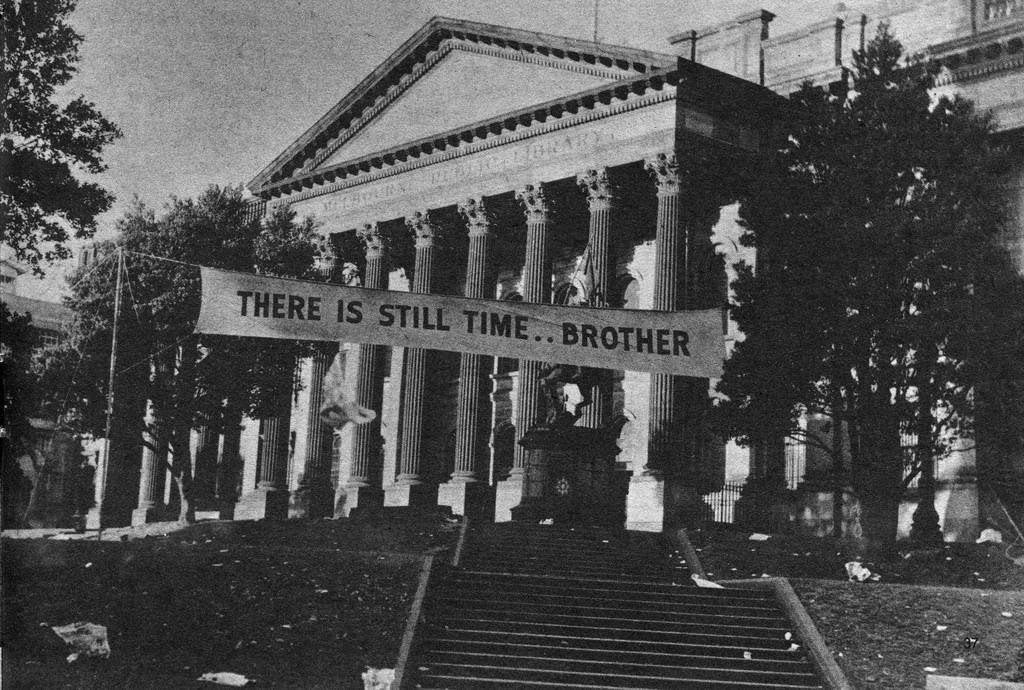 Physically speaking, we cannot separate. We cannot, remove our respective sections from each other, nor build an impassable wall between them. A husband and wife may be divorced, and go out of the presence, and beyond the reach of each other; but the different parts of our country cannot do this. They cannot but remain face to face; and intercourse, either amicable or hostile, must continue between them, Is it possible then to make that intercourse more advantageous or more satisfactory, after separation than before? Can aliens make treaties easier than friends can make laws? Can treaties be more faithfully enforced between aliens, than laws can among friends? Suppose you go to war, you cannot fight always; and when, after much loss on both sides, and no gain on either, you cease fighting, the identical old questions, as to terms of intercourse, are again upon you.

This country, with its institutions, belongs to the people who inhabit it. Whenever they shall grow weary of the existing government, they can exercise their constitutional right of amending it, or their revolutionary right to dismember, or overthrow it. I can not be ignorant of the fact that many worthy, and patriotic citizens are desirous of having the national constitution amended. While I make no recommendation of amendments, I fully recognize the rightful authority of the people over the whole subject, to be exercised in either of the modes prescribed in the instrument itself; and I should, under existing circumstances, favor, rather than oppose, a fair opportunity being afforded the people to act upon it….

The Chief Magistrate derives all his authority from the people, and they have conferred none upon him to fix terms for the separation of the States. The people themselves can do this also if they choose; but the executive, as such, has nothing to do with it. His duty is to administer the present government, as it came to his hands, and to transmit it, unimpaired by him, to his successor.

Why should there not be a patient confidence in the ultimate justice of the people? Is there any better, or equal hope, in the world? In our present differences, is either party without faith of being in the right? If the Almighty Ruler of nations, with his eternal truth and justice, be on your side of the North, or on yours of the South, that truth, and that justice, will surely prevail, by the judgment of this great tribunal, the American people.

My countrymen, one and all, think calmly and well, upon this whole subject. Nothing valuable can be lost by taking time. If there be an object to hurry any of you, in hot haste, to a step which you would never take deliberately, that object will be frustrated by taking time; but no good object can be frustrated by it. Such of you as are now dissatisfied, still have the old Constitution unimpaired, and, on the sensitive point, the laws of your own framing under it; while the new administration will have no immediate power, if it would, to change either. If it were admitted that you who are dissatisfied, hold the right side in the dispute, there still is no single good reason for precipitate action. Intelligence, patriotism, Christianity, and a firm reliance on Him, who has never yet forsaken this favored land, are still competent to adjust, in the best way, all our present difficulty.

In your hands, my dissatisfied fellow countrymen, and not in mine, is the momentous issue of civil war. The government will not assail you. You can have no conflict, without being yourselves the aggressors. You have no oath registered in Heaven to destroy the government, while I shall have the most solemn one to “preserve, protect and defend” it.

I am loath to close. We are not enemies, but friends. We must not be enemies. Though passion may have strained, it must not break our bonds of affection. The mystic chords of memory, stretching from every battle-field, and patriot grave, to every living heart and hearthstone, all over this broad land, will yet swell the chorus of the Union, when again touched, as surely they will be, by the better angels of our nature.

Next post: I know it’s an amazing day when, at the close, I see that Dennis Rodman speaks for me.