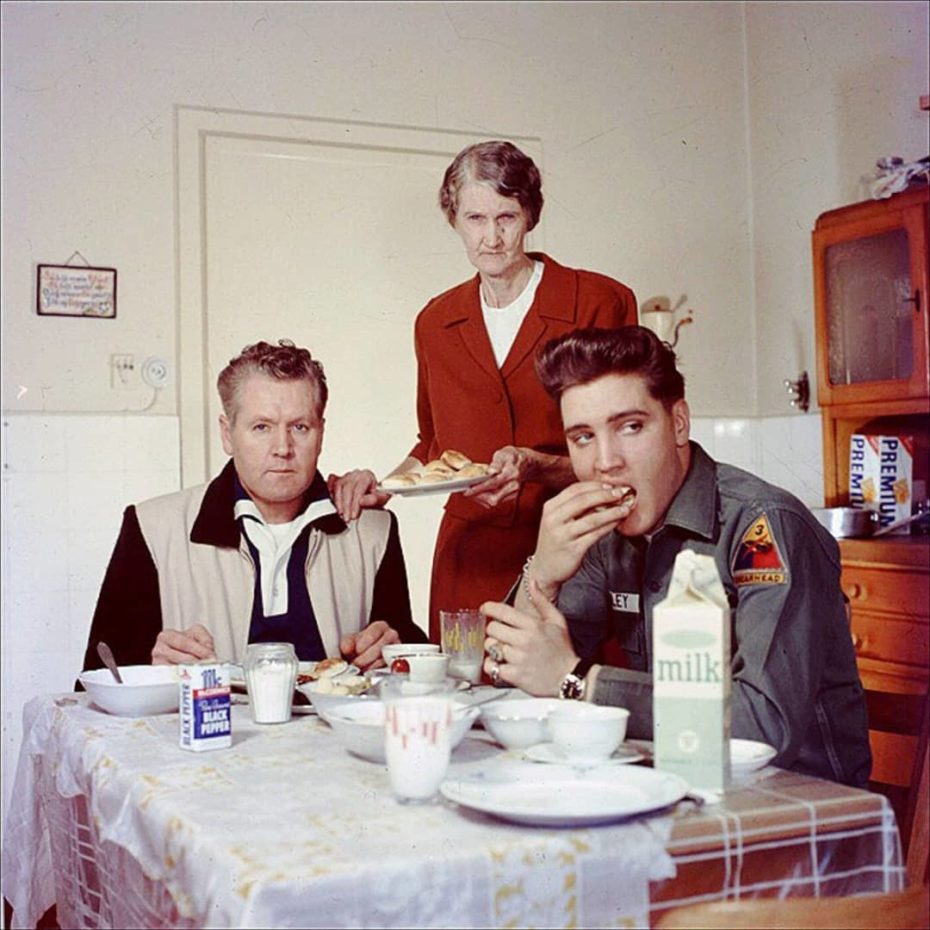 ELVIS AT BREAKFAST WITH HIS FATHER AND GRANDMOTHER

THE FIRST THING WE DO IS KILL ALL THE CELEBRITIES: America had prophets for a time. Solomon Stoddard, Billy Sunday, D.L. Moody, Billy Graham. We did not listen to them either, just as the ancient Israelites abandoned theirs for the comforting mantle of authority we too have sacrificed their wisdom on the altar of “You do you”. Seizing the recipe for a life more abundant from the lips of great men and bestowing it upon wicked people who preach at us from in-between cocaine lines on the coasts.

THE NEXT THING WE DO IS KILL ALL THE “CONSERVATIVES:” If the Founders came alive today and gained power, the first people they would hang would be the conservatives on the grounds they collaborated with the enemy.

BRING BACK THE DDT BUG ZAPPER! Mosquitoes kill around 830,000 people each year mostly by spreading malaria in underdeveloped nations. To eliminate this menace, we need only exterminate the 100 of the 3,500 or so species of mosquitoes that bite humans. If a new dictator arose and started killing 830,000 people a year, we would all accept the moral value of stopping him.

I THINK THAT I SHALL OFTEN SEE…. Contrary to the prevailing view that forest area has declined globallyâtree cover has increased by 2.24 million km2 ( 7.1% relative to the 1982 level).

THE BROKEN [OVERTON] WINDOW THEORY Overton Windows have a nasty habit of ending up in heaps of charred rubbish after some thoughtful souls decide “Enough of this claptrap” and helpfully burn the entire block to the ground, relishing the screams of those happily nailed up inside…. Pendulums don’t swing only one way, and humanity is not naturally wont to swing leftwards at all, let alone perpetually.

THE SONGS OF SILENCE: The Tower of Voices, a roughly 93-foot-tall concrete and steel structure, contains a wind chime for each of the 40 passengers and crew members who were killed on Sept. 11, 2001, and represents the final phase of the Flight 93 National Memorial. Each chime will generate its own distinctive sound.

SHINE ON YOU CRAZY ZIRCON! Shine-words are, of course, those fittingly vague concepts that aspirants are compelled to be and defend. Doing so thus produces the moral shine necessary for social and professional buoyancy. In contrast, shun-words are those equally nebulous terms that serve intentionally as millstones to hang around the necks of your enemies or competitors. In both cases all ambitious members of society are obliged to understand these words and their usage rules without ever acknowledging such rules even exist. Everyone above a certain IQ knows this. Because to not know it represents a hazard too great to ignore.

STOP THE TRANNY INSANITY! The transgender strategy to destroy academics who disagree with them was just exposed An academic paper on transgenderism in children supposedly has two authors, one male and one female, but both the male and the female name are used to refer to a single trans activist who spends much of his time attempting to corral a large mob for the purposes of persecuting those academics who do not agree with him and will not call him a woman.

Previous post: Let’s Review: 9/11 “Men like us shouldn’t go out like this. We’re supposed to die in a desperate battle performing great deeds.” And he did.