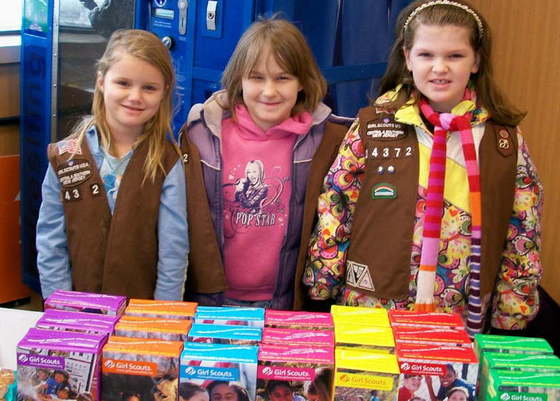 There oughta be a law against these kinds of high-pressure selling tactics.

Who let them out? Why are they everywhere? On the corners, by the entrances to supermarkets, at the crossings, and all over the place. They swoop into the neighborhood in massive SUVs driven by classic MILFs. They pull in, tumble out giggling, and yank their card tables and their boxes of contraband from the back. Then they set up their offerings in stacks, and slap crude handmade signs with a heavy helping of glitter on the tables. Then they don their gang colors and get to work on you.

They are the most ruthless retail agents known to man. They are virtually irresistible in their peddling of their wares. They do it with cutting edge cute, and they have no scruples concerning your desperate attempt to diet away the winter flab.

They are the Girl Scouts and no matter how I try I cannot avoid them.

And you are sunk. You have no hope of escape. Your whole universe of abstaining from sugar collapses. The few measly ounces you’ve lost by denying yourself that fourth scoop of Cherry Garcia at one in the morning are swamped by the tsunami of the C.U.T.E. in their little vests with their patches. Your world of hope for a change in your gut is gone, and the only thing left for you is the stark choice: Thin Mints or Samoas?

I’ve tried to escape their clutches, but it’s no good. Today, desperate to kick after discovering last night that I could hear a box of Thin Mints calling to me through a closed door, I even invented a granddaughter.

One of her henchgirls shrugged and did a cartwheel while the other two looked disappointed in that trademark Girl Scout disappointed look that I’m sure they give a patch for.

“We’ll never-ever tell,” said all three virtually in unison as if they’d practiced it throughout all of February at their Girl Scout/MILF coven meetings.

It was all over for me. All I could say was, 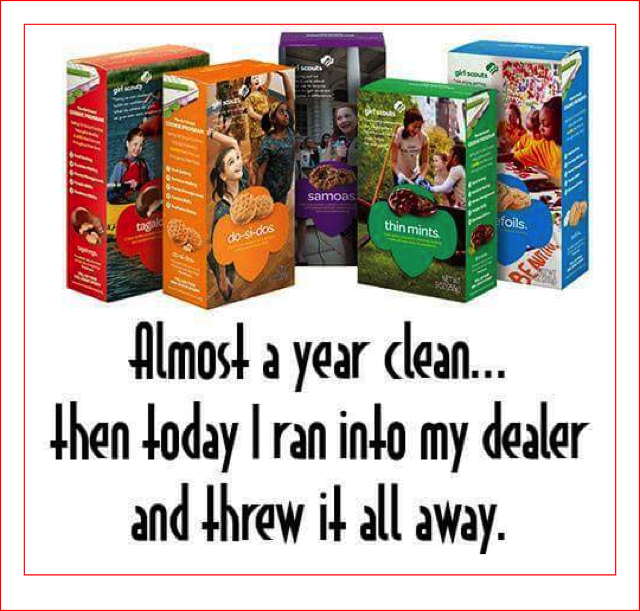 Next post: “I could teach anybody to be a farmer. You dig a hole, you put a seed in, you put dirt on top, add water, up comes the corn. “