June 6: A walk across a beach in Normandy 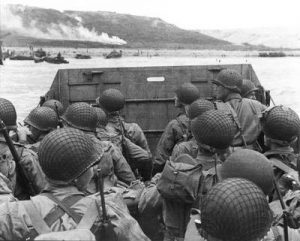 Today your job is straightforward. First, you must load 40 to 50 pounds on your back. Then you need to climb down a net of rope that is banging on the steel side of a ship and jump into a steel rectangle bobbing on the surface of the ocean below you. Others are already inside the steel boat shouting and urging you to hurry up.

Once in the boat, you stand with dozens of others as the boat is driven towards distant beaches and cliffs through a hot hailstorm of bullets and explosions. Boats moving nearby are, from time to time, hit with a high explosive shell and disintegrate in a red rain of bullets and body parts. Then there’s the smell of men near you fouling themselves as the fear bites into their necks and they hunch lower into the boat. That smell mingles with the smell of cordite and seaweed.

In front of you, over the steel helmets of other men, you can see the flat surface of the bow’s landing ramp still held in place against the sea. Soon you are within range of the machine guns that line the cliffs above the beach ahead. The metallic death sound of their bullets clangs and whines off the front of the ramp.

Then the coxswain shouts and the klaxon sounds. Then you feel the keel of the LVCP grind against the rocks and sand of Normandy as the large shells from the boats in the armada behind you whuffle and moan overhead. Then the explosions all around and above you increase in intensity and then the bullets from the machine guns in the cliffs ahead and above rattle and hum along the steel plates of the boat and the men crouch lower. Then somehow you all strain forward as, at last, the ramp drops down and you see the beach. Then the men surge forward and you step with them. Then you are out in the chill waters of the channel wading in towards sand already doused with death, past bodies bobbing in the surf staining the waters crimson. Then you are on the beach.

It’s worse on the beach.

The bullets keep probing along the sand digging holes, looking for your body, finding others that drop down like mere sacks of meat with their lines to heaven cut. You run forward because there’s nothing but ocean at your back and more men dying and… somehow… you reach a small sliver of shelter at the base of the cliffs. There are others there, confused and cowering and not at all ready to go back out into the storm of steel that keeps pouring down. And then someone, somewhere nearby, tells you all to press forward, to go on, to somehow get off that beach and onto the high ground behind it, and because you don’t know what else to do, you rise up and you move forward, beginning, one foot after another, to take back the continent of Europe.

If you are lucky, very lucky, on that day and the days after, you will walk all the way to Germany and the war will be over and you will go home to a town somewhere on the great land sea of the Midwest and you won’t talk much about this day or any that came after it, ever.

They’ll ask you, throughout long decades after, “What did you do in the war?” You’ll think of this day and you will never think of a good answer. That’s because you know just how lucky you were.

If you were not lucky on that day you lie under a white cross on a large lawn 75 long gone years later.

Somewhere above you among the living weak princes and fat bureaucrats and rank traitors mumble platitudes and empty praises about actions they never knew and men they cannot hope to emulate.

You hear their prattle, dim and far away outside the brass doors that seal the caverns of your long sleep. You want them to go, to leave you and your brothers in arms to your brown study of eternity.

“Fifty years? Seventy-five? A century? Seems long to the living but it’s only an inch of time. Leave us and go back to your petty lives. We march on and you, you weaklings primping and parading above us, will never know how we died or how we lived.

“If we hear you at all now, your mewling only makes us ask, among ourselves, ‘Died for what?’

“Princes and bureaucrats, parasites and traitors, be silent. Be gone. We are now and forever one with the sea and the sky and the wind. We marched through the steel rain. We march on.”

Normandy Today. From the Comments– Chris:

“I took the image on the link at low tide in Normady in 2006. This is literally at the edge of the water looking back to the bluffs where the American cemetery is. Look how damn far that is… it took a good 20 minutes to walk down from the cemetery to the water’s edge. I cannot imagine having gone the other way wet, seasick, with a 60-pound ruck on my back, a rifle that weighed a friggin ton unloaded, and with bullets and mortar shells raining down on me.

It could not be done by the men of today. Next post: Interesting Times. A Coup? How would we know?

Previous post: Meanwhile, near my old apartment in Paris, the people end lockdown