Hitchhiking in the Land of the Dead (Seattle, 2008) 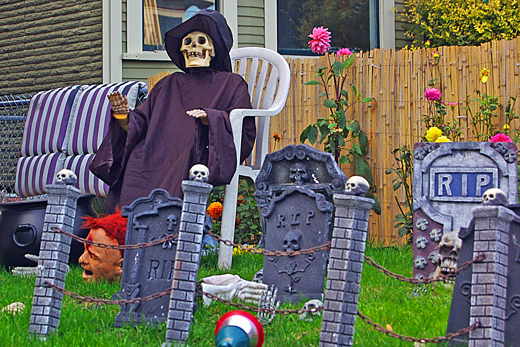 Pull up a chair and sit a spell. Death’s in residence on my block

Darkling I listen; and, for many a time
I have been half in love with easeful Death,
Call’d him soft names in many a mused rhyme,
To take into the air my quiet breath;
Now more than ever seems it rich to die
To cease upon the midnight with no pain….
— Keats, Ode to a Nightingale

Once upon a time, when Europe could be had at $5 a day, I found myself hitchhiking on the freezing plains of Spain just outside of Madrid. Car after car swept past me, the winds in their wakes chilling me further. This was very disconcerting since I had with me my fail-safe ride generator, a hot hippie girlfriend (Think a good-looking Janis Joplin.) My ride generator had never failed me before but on this day she was generating zero rides even though the traffic on the road was heavy. Then I noticed two things.

First, there seemed to be no trucks on the road. Second, the cars that huffed past us were filled to the gills with whole Spanish families bearing vast bouquets of flowers. And all those Spaniards looked, to the last, very grim.

After a few futile hours, we made our way — walking — a few kilometers down the road to a truck stop where, using my pidgin Spanish, the mystery of the ride drought was solved. It seemed that we were trying to get to Barcelona on one of the holiest days of the Spanish year — All Saints Day, or as we have it here in America, Halloween.

The Spanish tradition on this day is for the whole family to load up the car with flowers and other offerings and haul off to the local graveyard for a visit and picnic with the dearly departed. After that many go off to a traditional performance of Spain’s Faustian epic Don Juan Tenario in which the final act takes place in a cemetery. On this holy day in Spain, we had almost zero chance of getting a ride anywhere other than the local graveyard. Chastened, we made our way back to Madrid by bus and set out the next day with much better luck.

What remains in my memory from watching the parade of cars on that long-lost Spanish highway is just how dour and serious the Spanish were on their Halloween. They weren’t fooling around with death, but taking it at its word. They not only believed in death they also, in their prayers and rituals and their traditional play, believed that what you do in life determines how you will be treated in the afterlife. They had, at bottom, that adamantine belief that is the pearl beyond price of the Catholics. But even if you were to strip away the 2000 years of dogma, these people still had the one thing that more and more Americans lack at the core of their lives: a belief in something greater than themselves, a belief in something greater than man, greater than death.

Disillusioned words like bullets bark
As human gods aim for their mark
Made everything from toy guns that spark
To flesh-colored Christs that glow in the dark
It’s easy to see without looking too far
That not much
Is really sacred.
— Dylan

In my neighborhood in Seattle, many don’t believe in anything sacred other than, at best, Obama. Their entire belief system centers on that tin god than on themselves and their “only one life to live, live, live!.” All of which makes for an empty skin sack of existential desolation that they try to fill every Halloween with the greatest of American secular concepts: fun.

“Fun” is a curiously American concept that seems to have begun its invasion of all aspects of our shared life shortly after the end of WWII. I suppose that after the Great Depression and the war, the nation felt it could use a little fun. And, as usual, that great American axiom, “If it is worth doing, it is worth overdoing,” came into play. Nowhere do we see the idea that life should be “fun” pumped up into bigger balloons of pure vanity than on Halloween.

From a minor tradition of sending kids out to pick up some free candy, Halloween has mushroomed into a major American auto-fornication festival in which we regularly — and with increasing intensity — celebrate the meat state of life while pretending to vaguely celebrate the spiritual part. If you’ve noted, as I have, the increasing lust for gruesomeness in costumes at every new Halloween, you might have reflected that dark humor has taken a back seat to darker fascinations. One new costume around this year allows you to dress us as a corpse in a body bag complete with wounds and autopsy slashes. And that’s a mild one.

Added on to costumes depicting violent death, mutilation, and the corruption of the grave, we have the increasing trend to freak show street events and private parties where this week’s perversion is served as bubbling punch; as a witch’s brew we are only too pleased, dressed as dregs, to drink to the dregs. In Seattle, of course, freak show street events and perversion parties are pretty much the order of the day, if not the daily spectacle on many blocks. But there’s something about Halloween that brings out the horror show of many inner lives like no other event. The only thing that saves us from seeing ghouls and goblins parading naked about the streets with their full-body tattoos and multiple genital piercings on display is the colder temperature, but there are clubs that specialize in that all about the city so you can see it if you wish.

It seems strange that a day for the contemplation of mortality has been turned into a carnival of corruption in this country, but perhaps not all that strange. I’d suggest that, as the country becomes more secular; as it ceases to believe in anything other than the here and now, the moment in the meat, it becomes increasingly terrified of the extinction of the self by death. It is one thing to profess a belief in the Great Nothingness, it is quite another to have to face it. The only weak weapon that can be raised up against it is its denial.

Ernest Becker’s The Denial of Death touches on why this is so:

Becker argues that a basic duality in human life exists between the physical world of objects and a symbolic world of human meaning. Thus, since man has a dualistic nature consisting of a physical self and a symbolic self, man is able to transcend the dilemma of mortality through heroism, a concept involving his symbolic half. By embarking on what Becker refers to as an “immortality project” (or causa sui), in which he creates or becomes part of something which he feels will outlast him, man feels he has “become” heroic and, henceforth, part of something eternal; something that will never die, compared to his physical body that will die one day. This, in turn, gives man the feeling that his life has meaning; a purpose; significance in the grand scheme of things.

Of course, absent religion and the perception of the vertical in the universe, science and the deep belief in the Great Nothingness is a poor substitute. As Becker notes, without something larger than yourself, the “heroic project fails.”

We aren’t accustomed to failure in our ceaseless search to find a meaning in the Great Nothingness. But fail we do because the nature of the Great Nothingness that we so admire is exactly that, Nothing; death as a black hole with despair as the free-candy in your skin sack.

What the empty among us are compelled to do when confronted by death is a bit of mass-culture symbolic magic. We dress as what we fear most, and we deck our halls with symbols of death and decay. We pretend that shaking these shibboleths and feathered fetishes against the dark will protect us much as hiding under the covers kept us safe from the monster under the bed. It’s a child’s response to fear and it is not at all surprising that, as the worship of the Great Nothingness grows and festers among us, the ever-escalating morbid gestures of Halloween do nothing to fill the Great Nothingness that roils the souls of many of our fellow citizens. It’s a bit like the ceaseless urge to “keep ourselves in shape” that obsesses so many.

Alas, it will not avail us. You can drape yourself with the rubber raiments of Zombies all you want, the world will always, in time, eat your flesh down to dust. And without faith, that fate is the hard-core horror of existence as mere meat. Without faith, more and more of us find ourselves hitchhiking on the cold plains with no chance of being picked up. Without faith, the vehicles that pass us on the high road just aren’t going our way.

[Republished from October 2008. New this year, the ante goes up with these hyper-realistic hacked up chunks of human meat. There really is no bottom. Is there?] 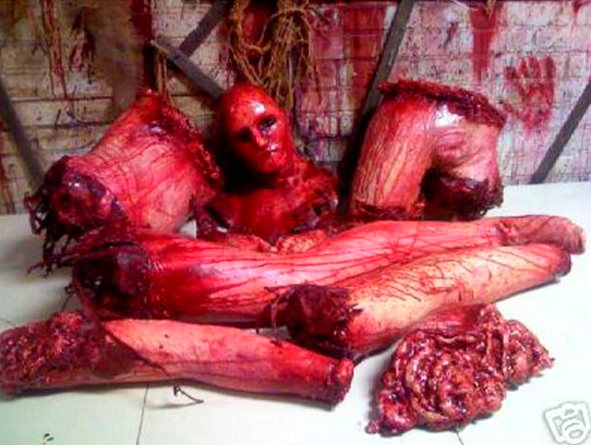 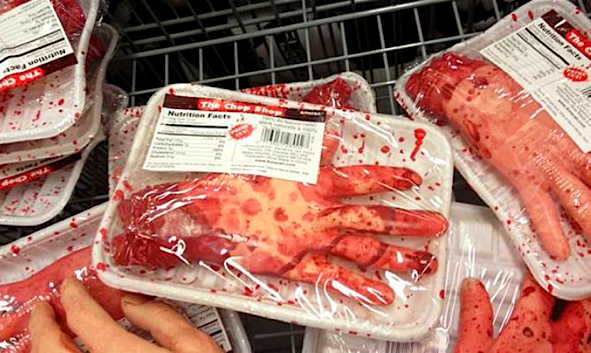 And this year comes word of “The fake “dismembered human” meat packages from a fake butcher called The Chop Shop were discount store Europris’ way of getting into the Halloween spirit.” Norway Pulls Hands Why not? Halloween is “for the children!”