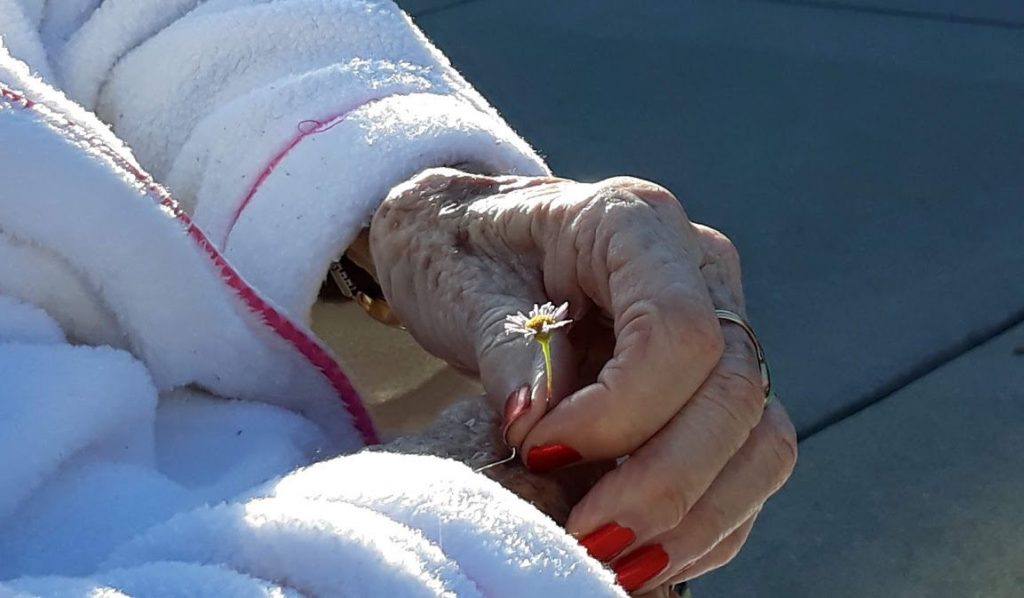 It was just cold enough to be refreshing while the sun was bright enough to be warm on her face when not in the shadows of the courtyard. It was getting on towards the end of a bad year that could have been worse. She was working hard, very hard, at getting her strength and balance back so she could leave this place and go back to her home. He’d come to see her every day and when it was warm enough they’d bundle up and go out into the fresh air for coffee.

On that day she happened to glance down towards the somewhat abandoned plantings that were waiting for Spring to be refreshed. “Oh, look at that,” she said. “Flowers. Flowers still.”

He looked down and saw what had to be the world’s smallest daisies peeking out from a plant low to the ground, almost hidden under a mound of leaves. He picked one and placed in her hands. she held it and looked at it for along moment and then placed it carefully on her lap.

They finished their coffee and then her therapist found them in the courtyard. “It’s time to do some more walking,” he said. “We need to get your balance back.”

On the way back inside he saw her pick up the miniature daisy from her lap and place it in the pocket of her robe. She did this deliberately. She wanted to be sure it would not be crushed.

Later he saw it on the table in her room. It was in a small cup and had been carefully watered.  It was still there and still fresh when the first day of the New Year came around.