The AMERICAN Party: I Am Not “Republican.” I Am Not “Conservative.” I Am Not “Alt Right.” None of These. “I am an AMERICAN.” 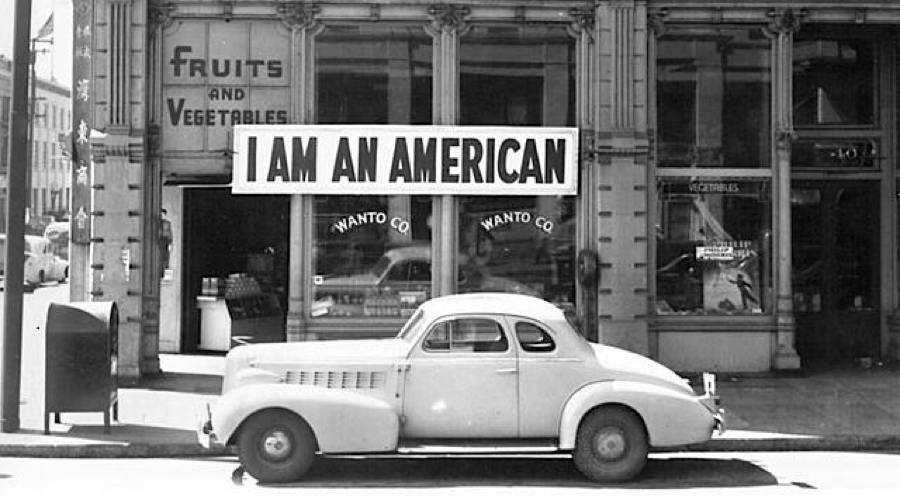 An American, one of the roughs, a kosmos,… No sentimentalist …. no stander above men and women or apart from them…
— Whitman, Leaves of Grass (1855)

Remember when Hillary Clinton, during her 2007 attempt to rule the world, stopped calling herself a “liberal” and rebranded herself as a “progressive?”

This relabeling from “Liberal” to “Progressive” was Clinton’s desperate attempt to crawl out from under the vast heap of crap she and all the other “liberals” had piled on themselves -– notably during her own husband’s administration. And who, when trying to run, wanted to have that old “liberal” ball and chain around her thick ankles? Not Hillary.

By 2007 “Liberal” had become so drenched in sewage liberals could only clean it through “rebranding.”

And it worked for them — and for Obama — just long enough to get them elected the first time by a credulous public who had seemingly never heard “progressive” before.

“Progressive…” it sounded so, well, hopeful. It was, after all, not “trans-” but “pro-“gressive.

After all, who can be against “progress?” Who is not pro “pro?”

Who, that is, except the vast majority of older Americans who had seen the wreckage that the progressives’ “progress” had wrought wherever it touched down on the American landscape.

Still, the recloaking of ye olde “liberal” wolves inside of the “Progressive Sheeps’ Clothing” worked well enough with the young and stupid as well as the old and malicious.

“Progressive” caught on because it junked “liberal” but didn’t say “socialist.” At least not in so many syllables, until the Democrat candidate Clownworld of 2019.

That was then. Now, of course, “progressive” as a brand has become synonymous with cheats, control-addicts, the walking brain-dead, lying Social Justice Warriors, and the power junkies that want to tell you all about the bad McDonalds Happy Meals in condom chewing San Francisco.

Today “Progressive” is as dead as Hitler’s charred corpse smoldering in a ditch outside the bunker on Pennsylvania Avenue. But “progressives” don’t know they’re crispy critters because they can’t entertain any ideas that weren’t minted in ye olde Soviet Union. So let’s let them keep it.

Let those bitter aging boomers cling to their Darwins and their “progressive” programs and labels. Progressives, after all, are the queens of worthless labels.

What we need to do is a little “rebranding” of our own in order to blunt the brain-dead attacks that keep coming from the attack poodles of the left. Attacks that when examined are all aimed at the label “Conservative” or “Republican” or, most recently, “Alt-Right.”

An attempt to pull all the Trump voters into one group was made under the ham-handed and, frankly, Deep State 1984esque label, “Alt-Right.” This label commits several branding errors in one cast. First, it has a hyphen and hyphens in labels have signaled nothing but “troublemakers” for decades now. Second, it has internal phonetic errors that echo German pronunciation as “Alt! Reich!” Not a good echo. Third, it insinuates all those under its umbrella are on the Right, which is not the case in a populist movement such as the Trumpening. Many do not wish to be lumped in with rightists of any sort. In short, the attempt to make us all “Alt-Right” simply isn’t making it. 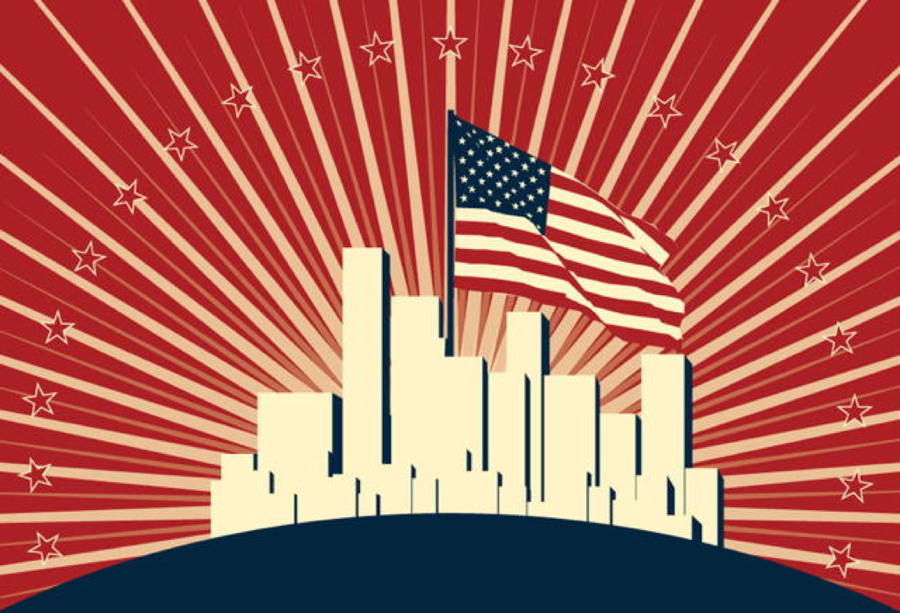 I AM AN AMERICAN.

Couldn’t be anything more.

Born and bred from ancestors that go back to the Massachusetts Bay Colony in 1636.

To call me a Conservative is to miss the point. 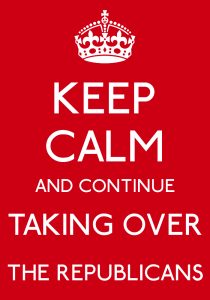 To call me a Republican is to mistake me by a mile.

Came from the hills and mountains,
The valleys and the plains ,
Some were kind and gentle,
And some too wild to tame.

A single, obvious, and overarching word to cover a wide, wide tent:

Americans all regardless of race, color, creed, or national origin.

Let’s rebrand ourselves from this point forward. Let us go back to the original brand:

When you are called a Conservative, you reply, “No, I am an AMERICAN.”

If someone tries to tar you with the label “Republican,” you must correct them by saying, “No, I am an AMERICAN.”

If accused of being some sort of stealth fascist by being labeled “Alt-Right,” you need to sort those mental midgets out by reminding them, “No, I am an AMERICAN.”

Do that consistently and we can all look forward to future disputes and elections that pit the “Progressives” against the AMERICANS. I know which way I’d bet.

It’s a big country and it needs a big rebranding. If we call ourselves “AMERICANS” we’re going to need a bigger tent. 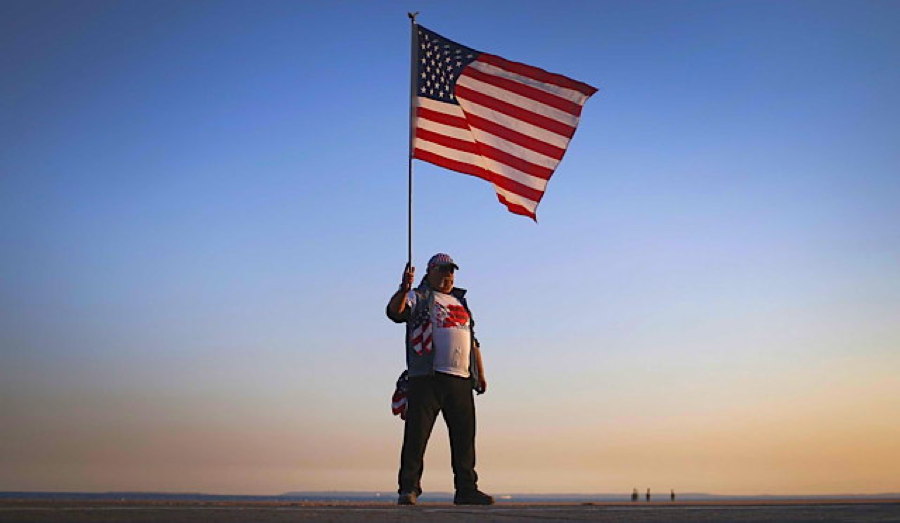 Failing to fetch me me at first keep encouraged,
Missing me one place search another,
I stop some where waiting for you

In order:
(Clint Black)
Well I got on in Bristol, by the old Virgina line
With a suitcase full of dreams,
And a brand new spendin’ dime

(Randy Travis)
I heard a guitar and a fiddle, banjo and mandolin
An old man opened up the door and told me “come on in”

(All)
They came from the hills and mountains,
The valleys and the plains
Some were kind and gentle,
And some too wild to tame

(All)
They came from the hills and mountains,
The valleys and the plains
Some were kind and gentle,
And some too wild to tame

(Merle Haggard)
A string of fearless hearts, on an endless ball of twine

(Ricky Skaggs/Patty Loveless)
Now like a precious treasure, that’s immeasurable in worth
We stand before a new wave, proud children of the earth

(Dwight Yoakam)
They came from the neon cities,
The suburbs and the towns
From Bakersfield to Baltimore,
It’s sacred holy ground

Next post: Fascism always starts with controlling the little things.

Previous post: When the militia gets around to hanging the Mayor of Portland, this will be Exhibit A at the drop