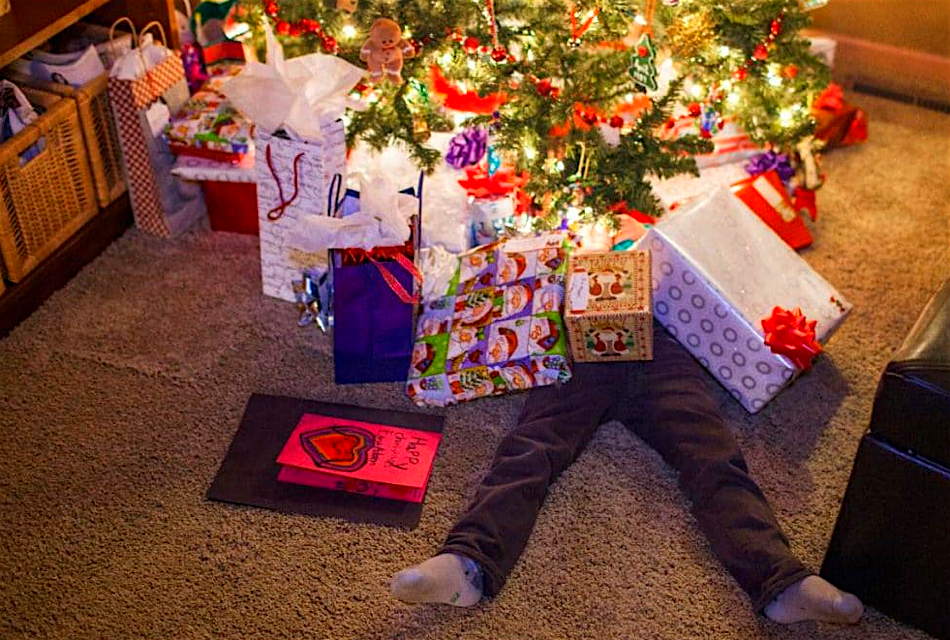 The best gift I’ve received in the last few years was a small wooden box, fashioned by hand, and containing a number of carefully selected small objects each with a personal meaning. It has no commercial value. It is a gift of the hand that is filled with the heart. I keep it nearby in my home and, from time to time, I open it and take out each object and hold them briefly before putting them back in their box and the box back on the shelf.

In another time and in another place I once saw the most Christmas gifts I’ve ever seen in a single home. It was in a place where the hands had gone astray and the heart been misplaced. It was the struggle of quantity to overcome quality made manifest.

It was at a home of some people I once knew in a town where I once lived in another life in another time long, long ago. They had the required large house of many rooms. As a family of four they had about five rooms for every person. It was a house they could all hide in and they did. They hid from each other and they hid all year. On Christmas, however, they came out and pretended they were still a family.

The tree was set up in what these days we call “the family room” even though the room was really just a pass-through for the other rooms. The tree was, as these things had to be in that land at that time, very large and professionally decorated in whatever theme was deemed to be “in” that year. The star at the tip touched and was bent down by the ceiling. The ornaments were so thick that they obscured the green boughs that supported them. The lights were so numerous that the whole tree could have been hauled out and found a place among the approach lights to an airport.

It was good it was a big tree since it needed to be strong to support the wild pile of gifts that started where the two stairs down into the sunken family room bottomed out. The gifts then rose, in a tumult of wrapping paper, in a riot of colored ribbons, to a level of at least two and a half feet by the time they reached the outer boughs. For the family of four there were literally hundreds of presents all wrapped and tossed into the room like some third-world garbage heap until they filled the family room corner to corner.

To pass through this room you had to step carefully along the edges and most people who’d come to the party just went down the adjoining hallway.

In the larger rooms on that day before Christmas the family of four was holding their party for their friends and acquaintances. At that time and in that land the people attending still had lots of young children and their laughter and chatter gave a nice Christmasesque soundtrack to the drinking and eating that went on and on and on.

Our hosts were, to say the least, not getting along that year. Alcohol was taking its toll on the couple, as were the standard infidelities and betrayals common to that set in that land at that time. The hosts tried to put their war into a state of truce on this day so they could pretend, for a little longer, that everything was picture perfect in their world. But as the drinks kicked in their bickering became more and more bitter and I finally sought refuge from the ill spirits and moved off into the house.

I stood at one entrance to the tree/gift room and looked out the window over the mound of presents at the softly falling snow that filled their yard and pool. The winking lights of the tree and the Manheim Steamroller Christmas music coming out of the hidden speakers gave me a moment of Christmas feeling. Angry voices rose for a moment from the far room and then faded.

One of their boys, driven from the room by his parents’ rancor, showed up at the other entrance of the room and looked out over the massive pile of presents. He was a good kid. About four years old and less than three feet high. Red headed and freckled. A Norman Rockwell of a boy. I smiled at him and he smiled at me and then took a step down the first of the two stairs into the gift room.

Before I could move that kid pitched forward into the gift pile and, with a swoosh and a crunch, was gone.

There were so many gifts piled up that they literally swallowed up the child so that the child could not be seen. He’d vanished beneath the waves of wrapping paper and bows.

After a moment his head popped up like a drowning child in a sea of turbulent affluence and he literally began to make crawling and swimming motions to get himself back to the safety of the stairs. There he climbed out, stood up and glanced at me ashamed by something he didn’t understand.

“Looks like you’re going to have a very big Christmas,” I said.

He looked out at the presents that contained at least a hundred with his name on them.

Then he went back to the party and back to his parents, The Bickersons.

I had a similar but much smaller Christmas that year in that lost land of long ago. But it was, for that year, a good Christmas.

As for The Bickersons, their marriage and family was finished by late spring of that year. It had gone off to the same landfill that today contains all those hundreds of gifts. It couldn’t, I guess, take the weight. I dunno.

Next post: “With all its sham, drudgery and broken dreams, it is still a beautiful world. “

Previous post: Something Wonderful: “Merry Christmas From Another Lost Place: This One Ancient and Cold “