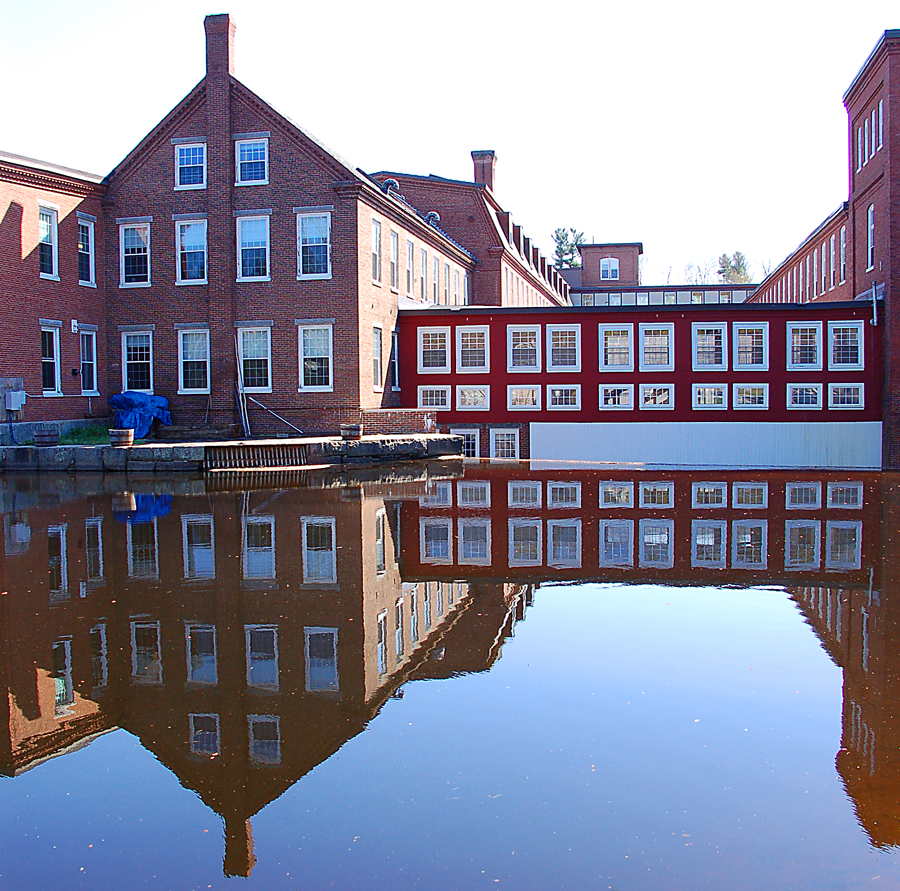 Upstream they’ve allowed the water level of the river to fall until the dam’s top blocks can be seen as the waterfall retreats. The river’s bottom emerges and a spring shorebird skitters along the edge of the green muck, its beak probing the dirt. Three pigeons pace on and peck at the drying granite blocks. Each block in the slightly curved dam wall under their feet is an easy ton of stone. The dam spans the river and, when the water is allowed to rise, it vanishes under a sheen of falling water. But now the water is low even though the river still flows.

Behind the dam a grating of steel bars lets the river flow under the dam and gush out the spill pipe at the foot of the stone blocks. There the river continues to flow under the footbridge, between the stone and brick walls of the mill, over another waterfall further on, and then, past other mills still downstream, out to sea.

The mill holds the river tight between its walls for a short span and, in the past, the dipping, turning wheels would have spun drawing the river’s power into the mill and, through rods and pulleys, relayed it on to the machines.

The first mill at this turn of the river was a saw mill in 1649. Then a grist mill came in its place. In time that too was torn down and the granite and brick buildings here now were raised up. The mill rises above the river, five stories of brick set on many courses of granite foundation stones. In its current form the mill made fabrics from civil war uniforms to fine cashmeres. Another mill just downstream made munitions for our arsenals. One gun from those foundries and lathes went first north to Portland and later west out over the ocean to Pearl Harbor. Later that mill’s machines made other parts out of case-hardened steel and pig iron. Other products, over the years, came from the mill: Christmas tree ornaments, cameras and film, paint, ice creepers for the Russian troops during World War II, rifle grenades, ski poles, waterproof boxes, and wooden shoes.

Today those machines are gone. Today the mill houses those who admire the fashionability of loft-like apartments; who value the anonymity of its corridors and numbered doors.

On massive granite blocks the mill as it now is has straddled the river for over a century. With care and maintenance its good for another century — or two or three — even though its use then cannot be foreseen anymore than the builders of the mill would have thought in their day that they were building housing.

The men who built the mill built better than they knew; far better than the Frank Lloyd Wright fancy “Falling Water,” once lauded by all but now already being rotted out and reclaimed by the stream it enfolded. The mill was not built as a fancy but as a machine for making and now for living, built to last by men whom we cannot hope to emulate.

In full spate the river surges between the mill’s walls and, at times, rises to flood the lowest apartments much to the distress of its fashionable tenants. 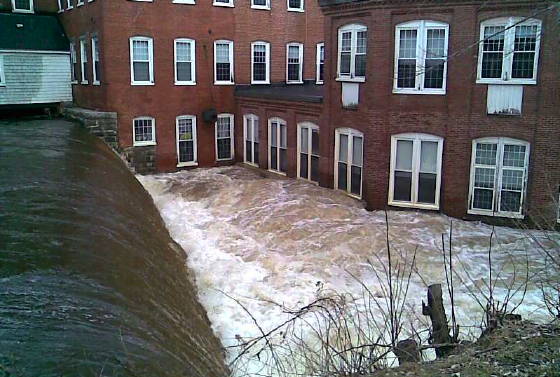 But then the spring flood abates to the hushed rustle and hum of flow. Over the calmer water swallows daub their nests under the eaves and, at dusk, dart and flicker over the water. And the mill around them, built long ago on the rocks of capital, skill, muscle, sinew and faith, contains the river below and the spring sky seen in its surface. The mill, raised on granite and formed from fire-forged bricks laid one after the other by arm and hand, mortar and trowel, built to last, endures.

Today we live in the reflection of their times. Today we taste the afterimage of events.